15.07.2021: “Jewish American Resilience in the Aftermath of the Holocaust“ – INTERACTIVE LIVE-TALK with Hasia R. Diner

“Resilience” holds a particular significance in Jewish history and expresses itself in manifold ways such as religious faith, cultural practices, art and music. But what does being resilient mean – both in past and present times? What cultural practices have been derived from the aftermath of historical events and can these types of resilience that were built then relate to our present times? These and other questions will be discussed with our guests and the audience in the format of a new series of Online-Talks: “Resilience in Times of Crises“.

On July 15th at 6.30 PM Hasia R. Diner will share her thoughts on “Jewish American Resilience in the Aftermath of the Holocaust”. After the destruction of so much of Jewish life in Europe and the slaughter of so many Jews there by the German Nazis and their allies, American Jews had no choice but to respond and figure out how to make up for the catastrophe. Although they had lived so far from the carnage, they considered it their obligation to create a memorial culture and to engage in a number of political and cultural projects in reaction to what had happened. Their efforts which were scattered, experimental, grass roots and at times contradictory reflected their desire to pick up the pieces of Jewish life and demonstrated a resilience and improvisation which revealed the degree to which they saw themselves as the heirs to that which had been destroyed.

HASIA R. DINER is the Paul and Sylvia Steinberg Professor of American Jewish History at New York University (NYU). A specialist in United States history she has written and taught in the fields of immigration history, American women’ history, and American Jewish history.

“Resilience in Times of Crises” is organized by the Global Jewish Leadership Programme. The Talk Series is hosted by Rabbi Max Feldhake and Jo Frank, the Managing Director of the Ernst Ludwig Ehrlich Studienwerk, and will be live-streamed on the ELES YouTube-channel. Questions can be submitted through the chat function. 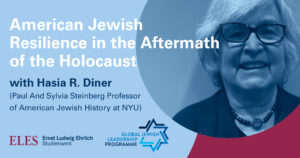