»Resilience« holds a particular significance in Jewish history and expresses itself in manifold ways such as religious faith, cultural practices, art and music. But what does being resilient mean – both in past and present times? What cultural practices have been derived from the aftermath of historical events and can these types of resilience that were built then relate to our present times? These and other questions will be discussed with our guests and the audience in the format of a new series of online-talks: »Resilience in Times of Crises«.

In August Rabbi Delphine Horvilleur will be our guest and talk with Jo Frank, ELES. Rabbi Horvilleur will share her thoughts on »The Jewish Art of Reparation«. The Temple is destroyed … The wedding glass is shattered … What if all these rites helped us to think about reparation? A study on the meaning of the broken in the tradition.

Delphine Horvilleur was born in France. She left to study medicine at the Hadassah Center at the Hebrew University of Jerusalem, before returning to France to study journalism. After studying at the CELSA, she joined the editorial staff of France 2, serving notably in the Middle East office in Jerusalem. She then studied in New York at the Rabbinical Seminary of the Hebrew Union College (HUC). Following her ordination at the HUC in 2008, she became one of the rabbis of the Mouvement juif liberal de France (MJLF) in Paris. In 2009, she took the helm of the Tenou’a review, where she became editor-in-chief and then, in 2012, managing editor. Since 2017, she has also been leading the Tenou’a Workshops, study and dialogue sessions that regularly bring together some 300 people every month in Paris. In 2020, during the COVID 19 lockdown period, the online version of these workshops united tens of thousands of people every week. She is one of the founding members of KeReM, the council of French-speaking liberal rabbis. Delphine Horvilleur is married and the mother of three children.

»Resilience in Times of Crises« is organized by the Global Jewish Leadership Programme. The talk series is hosted by Rabbi Max Feldhake and Jo Frank, the Managing Director of the Ernst Ludwig Ehrlich Studienwerk, and will be live-streamed on the ELES YouTube-channel. There you can also watch the previous talks with Rabbi Yehuda Sarna and Hasia R. Diner.

The Global Jewish Leadership Programme is part of the Jewish Future Forum (JFF), a joint project between the Leo Baeck Foundation, the Ernst Ludwig Ehrlich Studienwerk (ELES) and the German Federal Foreign Office. By offering scholarships to Jewish leaders from non-EU countries, the GJLP seeks to contribute to the strengthening of Jewish Change Agents amongst Jewish communities across the globe. We believe that self-confident, well networked and socially engaged Jewish students are prime candidates to support their communities and advance the interests of the Jewish people in Germany and in the wider world. 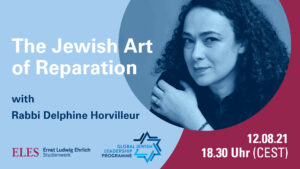